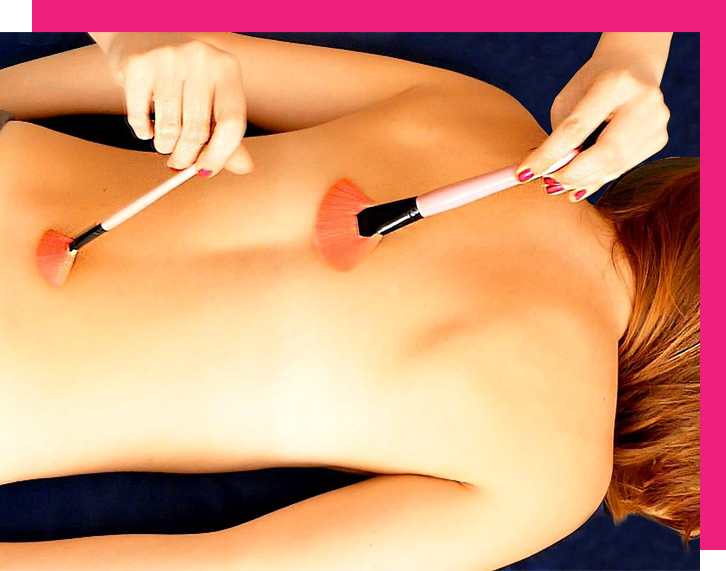 DALLAS — There is nothing lewd about the Tickle Bar. The website and Facebook page of the new Mockingbird-area business make it clear that illicit activities are strictly forbidden here. Yes, the half-naked woman splayed on a bed whose image is prominently featured on the place’s website appears to be in mid-moan, but that’s strategic, according to owner Kimberly Haley-Coleman.

What You Need To Know

The Tickle Bar offers experiences, like tracing and scratching, designed to produce endorphines

The business does not offer massage or traditional spa treatments

The Bar’s owner, Kimberly Haley-Coleman, founded the business when the pandemic slowed her nonprofit, Globe Aware

“I knew we weren’t going to spend millions of dollars advertising,” she said. “So, if I did this with a bit of a wink, we would be able to get more attention. If I’d called this a ‘back-scratch store,’ I wouldn’t have had as much attention, and we needed that.”

The Tickle Bar is a Mecca for sensory indulgence. The “bar” offers services that include scratching, skin tracing, and other light-touch-induced modes of serotonin-drenched euphoria — all while enjoying a sweet treat or a glass of wine. What you won’t find at The Tickle Bar is a massage package. Haley-Coleman said her model was the Drybar, which focuses only on blow-drying hair with no cutting, coloring, or any other services normally offered by salons.

“There’s a sense of luxury to your surroundings,” she said. “So the idea is that you’re getting kind of a feast for all the senses, not just for your skin, but you’re getting a little cookie and a little wine, you’ve got all these soft gauzy textures, quiet music, and people are whispering.”

Her business is one of a growing number of pandemic pivots. While many small businesses around the country have been crushed by the COVID-19 shutdowns and other restrictions, there has also been a surge in new businesses this year, according to the U.S. Census Bureau. By the week ending Dec. 5, the bureau reported, business applications were up 43.3% over the same period in 2019.

This uptick, however, is offset by the fact that about 28.8% of small businesses were closed for good as of mid-November, compared with the start of the year, based on data tracked by Opportunity Insights, a nonpartisan, not-for-profit research organization based at Harvard University.

For her day job over the last 20 years, Haley-Coleman has served as executive director of Globe Aware, a Dallas-based nonprofit that offers people “volunteer vacations,” combining wanderlust and altruism.

When COVID-19 strangled the U.S. economy and ground travel to a halt back in March, Globe Aware limped along, hosting online events and virtual fundraising. Haley-Coleman brainstormed ideas for ways to bring in money — a business that could support her and donate its profits to the nonprofit she founded.

She said she asked herself a series of questions that led to the creation of The Tickle Bar: “What do people want? What are they hungry for? What did they not have right now? And what do I want? what do I miss?”

“Frankly, if I had all the money in the world, I’d rather get my back tickled than a massage,” she added. “I just started thinking, ‘You know what? That is so crazy that I think I’m going to do it. And if I’m ever going to do it, now’s the time.’ ”

The reaction to her business has been mixed, she said. Some people find the idea of a tickle bar brilliant, while others just don’t understand the concept.

“It tends to evoke a very hot or cold response,” she said.

Though the name might conjure certain salacious or just plain silly imagery for some, the work of The Tickle Bar is backed by science.

Some of the techniques employed by Haley-Coleman’s staff have proven beneficial and calming for people on the autism spectrum, for example. Still, that hasn’t stopped the imaginations of faceless internet trolls from weighing in.

“I get that there might be a sense of humor around anything that has the word tickle in it,” Haley-Coleman said. “There seems to be 20 or 30% of the population that can’t get past the giggling nature of it, despite the fact that there is a very serious [health benefit] to sense of touch, whether it’s massage, kids on the spectrum, or even people enjoying getting their scalps scrubbed from getting shampooed.

“That sense of touch, to me, has nothing to do with giggling or anything inappropriate,” she continued. “But for a certain segment, it’s hard for them to get past that for whatever reason.”